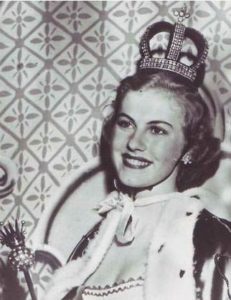 Did beauty pageant queens ever wear original diamond crowns? The tiaras seen today – large, bright, light and glitzy – look like anything but the real thing.

Take for example the one Sandra Bullock threw across the room in Miss Congeniality. Granted that one was loaded with dynamite and made for Hollywood, but you get the picture.

It was 1952. The Pageant Queen was Armi Kuusela, a 17-year old Finnish beauty. On June 28th in San Diego, she was proclaimed Miss Universe, the most beautiful woman in the world, and she wore none other than the Russian Imperial Nuptial Crown.

Set with over 1500 diamonds, including 320 cushion cut diamonds weighing about 182 carats, this crown had a stellar past indeed and it formed part of the Russian Imperial Regalia.

What was a part of the Russian regalia doing in America? That’s a very good question.

The Regalia consisted of the most magnificent symbols of Russia’s vast wealth and power. Catherine the Great’s iconic 18th-century diamond crown, for one. Then there’s the solid gold sceptre capped by the Orlov diamond, one of the ten largest in the world. Both, along with the spectacular gold imperial orb topped by Ceylon sapphire weighing 195 carats, are now in Russia in the Diamond Fund of the Moscow Kremlin. But the Nuptial Crown (only worn at imperial weddings) got away shortly after the Bolshevik Revolution of 1917. 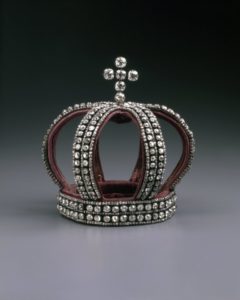 So how did a Finnish teenager in California come to don this historic Russian treasure that had graced the heads of none other than the highest Russian nobility, not to mention Empress Alexandra Feodorovna on her wedding to the future Tsar Nicholas II?

It’s a bit of a mystery.

We know the historic crown, along with 124 other crown jewels, was purchased from the Bolsheviks by a syndicate and first sold in the west as lot 62 in Christie’s landmark 1927 London sale appropriately titled, An Important Assemblage of Magnificent Jewellery Mostly dating from the 18th century, The Russian State Jewels.

Perhaps Cartier, who advertised the crown in 1953, loaned it to the pageant (talk about product placement!). It then appeared at Parke Bernet auction in New York in 1966.

Suffice it to say, we have an American heiress, Marjorie Merriweather Post, to thank for its continued presence on our shores. Today it is on public view at Hillwood Estate, Museum and Gardens in Washington D.C. In fact, American collectors and dealers played a huge role in preserving artistic and precious treasures from Russia’s imperial past.

Of course, if you happen to come across any of the Russian crown jewels featured in that 1927 Christie’s catalogue, do one thing before you do anything else – call me!

In the meantime, though, have a look at our own Russian imperial treasures by clicking on each photo and perhaps you’ll become the next chapter in the story of one of these unique objets d’art: 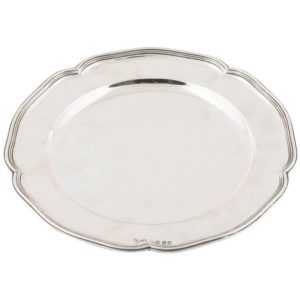 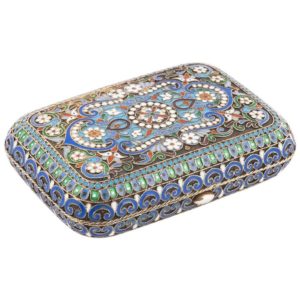 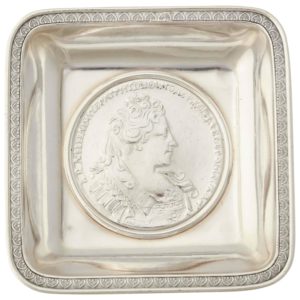 « When in England, Buy English
Fond Memories of the Fontanka – March 2018 »