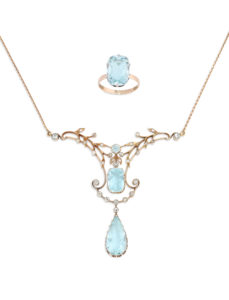 The parure (a French word for jewelry set) was still the height of fashion not only in London, Paris and Vienna, but also in the courts of St. Petersburg, at the turn of the 20th century.

It often consisted of a necklace, bracelet, pair of earrings, a ring, several brooches and, for the grand ones, a tiara.

While several examples exist in their entirety mostly in museums, thanks in part to their original fitted cases that allowed separate pieces to be preserved through the decades, Russian imperial parures are exceedingly rare.

The cause? The Bolshevik Revolution in 1917.

We know a little about the fate of the Russian empire’s crown jewels: most are gone, lost in that tragic turmoil that marked the end of a dynasty.

Given the enormous intrinsic value and the rarity of such treasures, and indeed of each individual gemstone, there is little hope of finding them intact, if at all. In uncertain times the first thing to be dismantled is jewelry – and this is the case for Russian parures.

I have yet to see one that’s intact, with all its pieces, re-appear on the market. One by Bolin did come close in 1978 and was sold at auction.

That’s why this beautiful aquamarine necklace together with its matching ring from Imperial Russia was such a find. 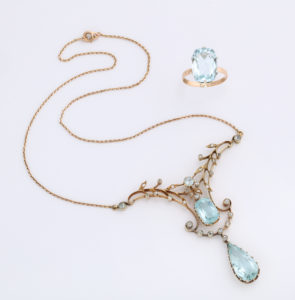 The fact they not only survived the revolution, intact and together, had neither been redesigned nor divided among family members throughout the 20th century and into the 21st is remarkable.

While the maker is unknown, the elegant necklace and delicate scrollwork design around the ring point to a jewelry master on the forefront of the Art Nouveau garland style from the beginning of the 20th century.

The natural aquamarines, untreated and rare and, in particular, the desirable large cushion-cut ring have that wonderful tsarist era style of faceting characteristic of the fabulous Russian jewelry workshops of St. Petersburg.

I’m thrilled to present to you this beautiful aquamarine necklace and ring as one of the last remaining examples of the amazing production of precious Russian jewels from the imperial era.

P.S. The aquamarine is the birthstone for March – the perfect gift for someone who’s just as rare.

Tour with Marie to Russia before her book on the history of Russian jewels hits the stands.

Beyond Fabergé: Imperial Russian Jewelry will be published fall/winter 2020. Meanwhile you can learn about the glories of the Russian court and its treasures firsthand from Marie on the spot in St. Petersburg and Moscow, where she will share with you new information from her groundbreaking book.

Be sure to register by March 10 to receive the Early Bird discount. Simply enter the code EBSPBMOS2020 at check out when you select the full-price option.