Enter Catherine I, the first in a line of five Empresses of Russia in the 18th century whose reign, beginning in 1725 would mark the dawn of the Romanov Dynasty’s glorious age of jewels and diamonds.

Catherine was overshadowed by her husband Tsar Peter the Great, the mighty sovereign who founded St. Petersburg. Yet the story of Catherine I who became Empress of Russia after Peter’s death in 1725 is almost as remarkable as that of her more famous namesake, Catherine the Great. 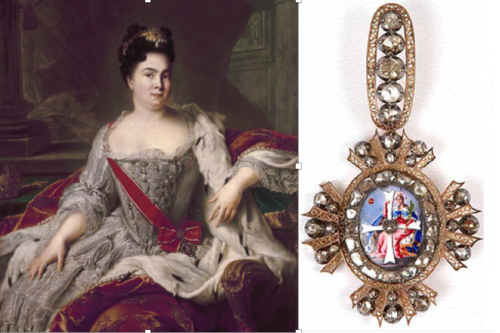 Empress Catherine I of Russia, Jean-Marc
Nattier, 1717. Unlike her more austere husband,
Catherine I did not disdain jewelry. Source:
Wikimedia Commons. Order of St. Catherine by
Johann Keibel, 1870s.

Born into poverty as Marta Helena Skowrońska in the Baltic region of Livonia, she was a beautiful young woman and as a kitchen maid of a Protestant Pastor first caught the eye of a Russian General, and later Count Sheremetev as his troops were invading the former duchy during the Great Northern War with Sweden around 1702.

When Peter the Great first saw Catherine it was love at first sight, and he eventually took her as his consort. Her beauty however was more than skin deep.  The empress was courageous and had an innate gift for diplomacy. When the Turks captured Peter during an unsuccessful campaign in 1711, she was the one who negotiated his release.  As a token of thanks, Peter the Great established the Order of Saint Catherine, which he presented to her in gratitude, seen here and in her portrait.

Read more about this sensational era in our chapter The Tsar’s Jewelers in Beyond Fabergé: Imperial Russian Jewelry For a signed copy click here.

« A Rare Find: A Russian Aquamarine Necklace and Ring Parure
Difficult to Pronounce… »