For our final post on this topic (read: Part 1 & Part 2), or let’s just say penultimate post – for who knows what treasures may reappear – let’s look at a handful of Russian Crown Jewels that have resurfaced in the west.

First, this pair of diamond bracelets, circa 1760, were featured in the 1925 Moscow catalogue: Russia’s Treasure of Diamonds and Precious Stones by Professor Alexander E. Fersman and sold two years later at Christie’s in London (1927). In 2006, one appeared at auction and sold for $259,082.

To recap, the systematic liquidation of the Russian Crown Jewels began under the Bolsheviks in 1927 and lasted until 1936. According to Victor Nikitin, director of the Diamond Fund of the Russian Federation in the 1990s, over three-quarters of the jewels that were listed in the 1925 album were sold to the west. Also, many of the 228 entries that left Russia contained multiple jewels, like no. 152 which had up to 123 precious stones including diamond trimmings. Some 92% of the un-illustrated items in Fersman were sold, leaving little hope that they will ever be found. However, Nikitin claims that the Moscow Diamond Fund collection itself had diminished from 717 to 141 items.[i] This leads me to believe there are many still out there, waiting to be discovered.

To me, finding a Russian Crown Jewel although less lucrative, is akin to spotting a Fabergé egg. Unlike Fabergé, so little is known about their makers. Whereas the imperial eggs are mostly accounted for and have survived, massive parures, diamond rivières, and bejeweled tiaras have all but disappeared from even Russia. We do not see them in the Hermitage, in the Diamond Room nor in the Diamond Fund of Moscow. That’s because, sadly these were the first to go for sale. What a treat it would be to examine the mounts and designs, to say nothing of having the opportunity to see the unsurpassed size and quality of the gemstones themselves – especially given the glorious, yet tragic history behind them.

Here are two more jewels that have resurfaced on the market within the past 15 years. This will give you an idea of prices 92 years ago vs today. Values are approximate.

Diamond Bow Brooch and Necklace, 1760s
Sold separately in 1927 these two elements were featured together as a single necklace with bow ornament in 2005 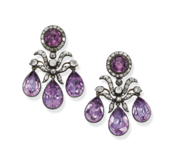 This ends my online musings on the subject (more will be included in our forthcoming book, Beyond Fabergé) unless of course, another missing jewel resurfaces. And you will hear about it here!

*Surprisingly the set was unsold when re-offered in 2016 due, in my opinion, to an overly aggressive estimate.