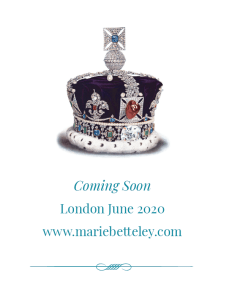 For those who love Russian treasures London is the place to be. That’s because from May 31 to June 7, 2019 London is celebrating Russian Art Week and Christie’s, Sotheby’s, MacDougall’s and Bonham’s have all put out their top lots to entice worldwide buyers to their London auctions.

What you especially need to know is that I absolutely love London. It’s such a bedrock of amazing jewels and that’s why I’m so excited to announce that Art & Treasures Tours is hosting our inaugural London tour in June 2020 and we’ll be announcing all the details this summer. (To receive updates, make sure to join our list!)

Now back to London’s auctions:

I have such fond memories of flying from New York to London as a Russian expert at Christie’s and picnicking (during my break) in Green Park.

Since 1927 (with the sale of the Russian Crown Jewels), London has been the preferred venue for Russian jewelry and treasures sales and it was here, in the 1930s, that Lord Grantchester bought the first Fabergé Imperial Egg for under two hundred quid.

In the summer of 1935, London hosted the largest Russian art exhibition in the west. The first of its kind, and held just 18 years after the Bolshevik Revolution, the exhibition created quite a sensation in Europe – even though no one knew much about Russian art back then.

I get so much pleasure from poring through that 1935 catalogue with its enticing descriptions of grandeur and splendour!

Unlike today, the entries were brief and images few, leaving almost everything up to the imagination. One entry that caught my notice was no. 638, The Pelegrina Pearl. Did you know that this world-famous jewel was once owned by the King of Spain and Elizabeth Taylor, and that it was lent by Princess Zinaida Yusupov to be exhibited in London in 1935?

The whole exhibition must have dazzled all who attended, judging from its roster of illustrious lenders. To name a few others: Prince Orloff, Princess Tenisheff, Countess Bushoeveden, HRH the Duke of Kent, HRH Princess Victoria, Madame Baletta, HIH Grand Duchess Xenia and her Majesty the Queen.

As a keen observer of the Russian treasures market since my auction days, I’ve seen prices surge, plunge and plateau. The middle range has stalled (like many other antiques markets have), but the top quality lots continue to bring decent prices.

Of course, since the 1950s, it’s been the fresh-to-market items that consistently fetch the most and values can skyrocket with a solid provenance and archival discoveries.

It’s an exciting time to be in this business. Although values have dipped since the time period between 2006 and 2008, surprises and delights are always just around the corner.

In the mood to look, but not keen to bid? Stay right here and explore some of my favorite Russian finds: 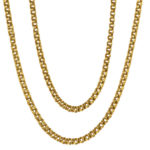 We seldom find these multi-looped chains made of gold from the Romanov era. The links are set at slight angles to produce a three-dimensional effect. This one is extra long at 54 inches. Details

My jaw dropped when I found this beauty because the majority of Russian jewels on the market today are from a later period. This one dates from the era of the first tsar Nicholas of Russia (1825-55). In original condition, it is a perfect gift for the man who has everything – except an imperial Russian gentleman’s ring! Details 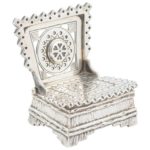 In medieval Russia, guests were traditionally greeted at the door with salt and bread on a presentation platter. These salt cellars in the form of thrones were often perched on top of the loaf. The more exclusive ones were made of silver and adorned as this one is with old Russian motifs by renowned Russian silver firms such as Pavel Sazikov, named after the forefather of Russian silversmiths and founder in 1793 of one of the finest silver firms in the empire. Details 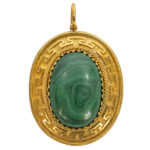 Why not a Romanov era pendant in malachite to wear or present in your home as a gift? This beauty dates from around 1860 during the reign of Alexander II, the Tsar Liberator who emancipated the serfs. The slightly domed oval malachite sits within a gold Greek Key border with a high carat matte finish. Details 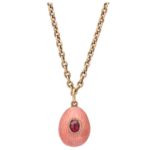 Cap the Easter season (both Western and Russian Orthodox) with this salmon pink enamel miniature egg pendant. Mounted in gold and enhanced with a faceted oval ruby. Details

And while we’re on the subject of Russian jewels and treasures, I was so pleased to present The Dazzling Jewels of Imperial Russia to the Toronto Newcomer’s Club on May 14th. After the presentation, club representative Jen Eng gave me a beautiful orchid and it was simply the perfect ending to the spring season of lectures – we are now inviting bookings for Fall 2019 and Spring 2020.

Jen Eng of the Toronto Newcomer’s Club thanks Marie with a gift of an orchid after Marie’s presentation on The Dazzling Jewels of Imperial Russian (May 14, 2019)

« The Fate of the Russian Crown Jewels, Part 3
Summer Reflections from a Jewelry, Art & Treasures Dealer on Her Trade »