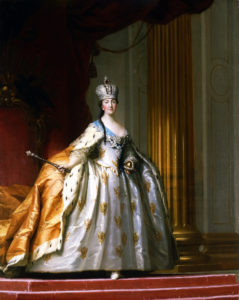 In Part 1 of the Fate of the Crown Jewels I wrote about the missing Russian crown jewels and you might be wondering how the lot ended up in the hands of the Bolsheviks.

Well, in 1914 when Germany invaded Russia and the Great War erupted, the Russian Crown Jewels were packed into eight sealed trunks and were expedited from Petrograd (St. Petersburg) to the Armoury Chamber in Moscow.

In Moscow, the trunks with the jewels remained sealed. No one had a clue that such treasures lay inside.

The war ended, followed by the downfall of the Romanov dynasty and the Bolshevik seizure of power, but still the jewels lay undisturbed.

Then finally in November 1922, the trunks were opened in the Kremlin.

Imagine the surprise of the officials unpacking these unbelievable historic treasures as they placed them one by one on a table where they lay in panoramic splendor.

Catherine the Great’s Imperial coronation crown sat in the middle surrounded by some 400 lavish jewels set with diamonds, rubies, emeralds, sapphires, pearls, alexandrites, topazes, amethysts, aquamarines and other beryls, and weighing a total of 36,360 carats – all on one table!

Spanning the reigns of the Russian emperor Peter I (The Great) in 1698 to Nicholas II in 1917, the vast majority of the jewels hailed from the early Romanov era (this gets my blood racing because I rarely see Russian jewels from before the 1860s!). In fact, 85% dated were between 1698 and 1855 and 40% of those were from the reigns of Catherine the Great (no surprise there) and her son Paul I (1762-1801).

The imperial regalia was saved and remains in the Kremlin Armoury to this day, along with other major historic jewels associated with the tsars.

And the rest? You guessed it. Cash was king for the communists who wanted nothing to do with these Romanov baubles. The jewels were exhibited for one month and then catalogued. In 1925 the catalogue was published and offered to prospective buyers.

In other words, let the sales begin! And I’ll tell you all about that story in Part 3. For now, suffice it to say that between 1927 and 1936, when the selloff ended, over three quarters of the jewels were sold in the West.

Thanks to the GIA, the 1925 catalogue is online and includes closeups of these magnificent jewels. Take a look and keep the images in mind as you shop my specially curated collection of crown jewels treasures.