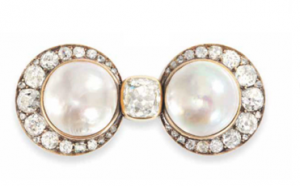 Our Spotlight on Russian Jewelers, showcasing the many talented artisans of Imperial Russia continues with Vladimir Finikov.

Many of the House of Bolin’ workmasters in St. Petersburg were of European or Swedish descent.  Finikov, Bolin’s chief jeweler was native to Russia and a brilliant jeweler, designer and silversmith.

In jewelry he worked with large baroque pearls enhanced with lines of rose diamonds as seen here.

Vladimir Iakovlevich (until 1916), Bolin’s chief jeweler, owned a workshop from 1880 to 1892 at 55 Moika Embankment in St. Petersburg. In 1897, he had 15 workers and made bracelets, brooches, cuff links, rings and cigar cases for 23,000 rubles. Finikov worked for Bolin from 1900 to 1908. In 1883, Mikhail Perchin, Fabergé´s head workmaster, married Finikov’s daughter. See “Bolin: The Brightest Star” in Beyond Fabergé: Imperial Russian Jewelry. 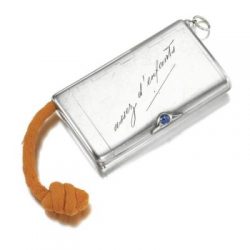 Rediscovered in the Swedish Foreign Office in Stockholm in 2008 and auctioned in London in 2009, Grand Duke Vladimir Aleksandrovich’s personal collection contained, along with several pairs of Bolin cuff links, an amusing silver cigarette case-no doubt a gift from his wife Grand Duchess Maria Pavlovna-inscribed “assez d’enfants” (no more children) on the cover by Finikov.

My particular Finikov find was a delightful gold heart locket set with a few diamonds which I found on a Russian charm bracelet with charms by different St. Petersburg jewelers.  Finikov also supplied the Kievan house of Marshak.