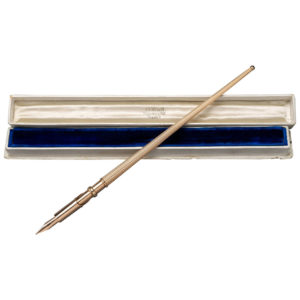 I bought this pen not knowing who made it.

I knew it was Russian and that it was made before the Revolution. It had the right look, feel and heft, with a wonderful rose gold patina. I picked it up, pretended to sign a document with it and I knew one thing:

I had to have it.

So you can imagine how delighted I was to discover that the pen maker was none other than Russian imperial court jeweller, Freidrich Köchli.

On its sleeve were the initials in Latin F K separated by a star. This was its hallmark, and only master jewelers could use it on their creations. Also interesting was its original box, inscribed with the name Hahn – another famous court jeweler who plied his trade on the famous Nevsky Prospect. This pen was proof of the collaboration of these two jewelers, both of whom will be featured in my upcoming book, Beyond Fabergé.

While he is little known today, Swiss born Köchli can be counted among the greats of Russian jewellers and was favored by Tsars Alexander III and his son Nicholas II, as well as by the wealthy Russian Grand Dukes. By 1903, his firm had surpassed even Fabergé by accumulating no less than four Grand Ducal warrants. This is significant because Grand Ducal seals were more difficult to obtain than Imperial warrants from the Tsar and symbolized excellence of design and workmanship.

A visit to the site of Köchli’s workshop at 17 Gorokhovaya Street in St. Peterburg will be featured in our upcoming Walking Tour of St. Petersburg Jewelers scheduled for October 2019. Learn more about our Art and Treasures Tours right here.

Be first to hear about Marie Betteley’s new finds and get the latest information on her tours and lectures by joining our email list? Yes – Sign me up!