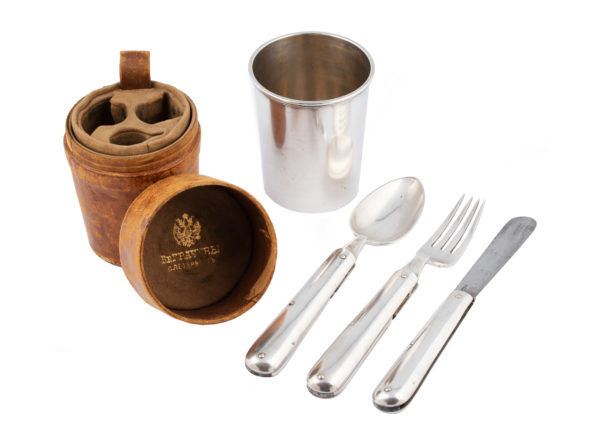 Russian Silver Picnic Set by Grachev of St. Petersburg, circa 1900

A rare Russian silver traveling necessaire from the Romanov era, period of Tsar Nicholas II, comprising a silver luncheon fork and knife with steel blade, soup spoon and beaker, the flatware of plain silver with rivets on slightly tapered handles, the beaker with reeded border, in original fitted leather traveling case, the inside of lid stamped Brothers Grachev, St. Petersburg in Cyrillic below the Imperial Eagle.

One of the most prominent silver firms in St. Petersburg, the Gratchev Brothers were principal suppliers to the Imperial Russian Court. In 1892, the company then situated in Pevchesky Lane 14, was granted the title of Imperial Court Supplier and allowed the use of the Imperial Warrant or double-headed eagle as part of its hallmark.