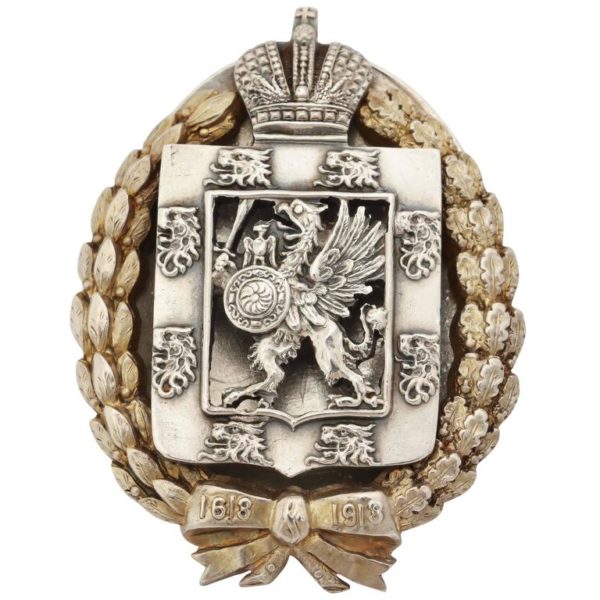 This Russian silver Imperial hereditary badge was awarded to individuals who personally congratulated he Tsar on the Romanov 1913 Tercentenary. Accompanied by original Imperial warrant. Baron/General Wolff, framed. (2) The badge marked with 84 silver standard St. Petersburg 1908-1917 and with workmaster’s initials for Eduard Kortman.

Supplier to the Russian Imperial court, Eduard Johann Kortman owned a gold and silver workshop in St. Petersburg from 1848. Located on Nevsky Prospekt, no. 34, his firm is most renowned for enamelled jetons, imperial badges and other fine gold objects. The jeweller received the Order of Saint Stanislas, Third Class, and the Order of Saint Anna, Second Class, and also worked for the House of Fabergé.

This certificate states that the widow of Lieutenant General Wolf, Baroness Louise Andreevna Wolf received this pin for having personally congratulated their Imperial Highnesses on the occasion of the Romanov Centenary on the 18th of February 1913 in St Petersburg. The black and white photo shows St. Petersburg gates decorated for the Tercentenary of the House of Romanov on 21 Sadovaya Street.